PFAS in our Drinking Water – How Dangerous is it Really? 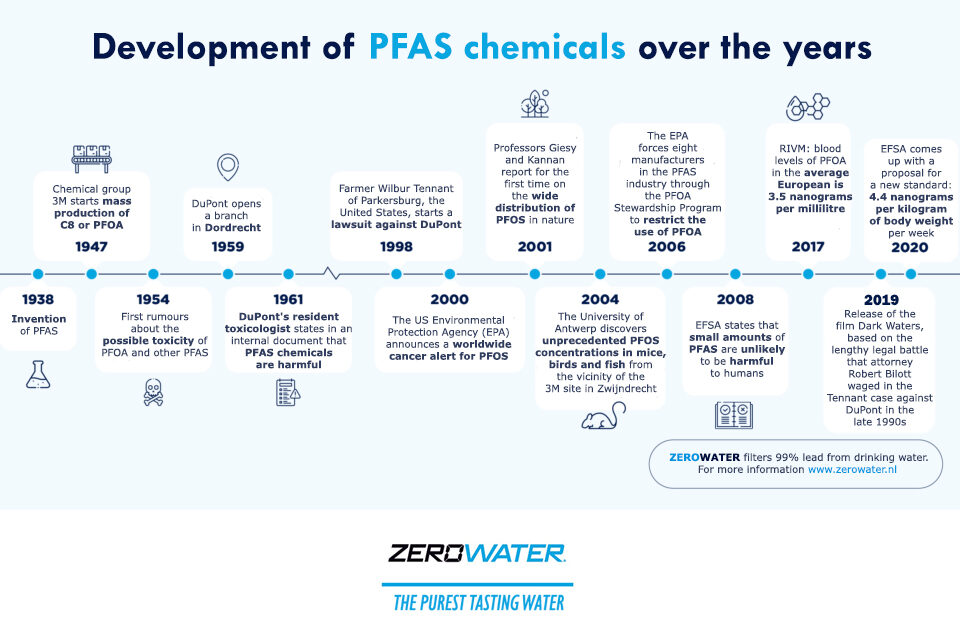 What was considered a wonderful invention in the middle of the last century has now become an environmental scourge: PFAS. PFAS (poly and per-fluoroalkyl substances) is a collective term for man-made chemical compounds, of which there are now thousands of varieties. PFAS are dirt, water and grease resistant, which makes them useful for many consumer products, such as lubricants, food packaging, non-stick coatings, fire extinguishing foam, water-resistant textiles and cosmetics. At the same time, this durability means that they do not properly break down. The result? Due to floating waste and emissions, PFAS settle in the soil, dredged material, and ground and surface water. They are not called ‘forever chemicals’ for nothing.

The fact that PFAS are harmful to health became apparent shortly after their invention. In the 1960s and 1970s, researchers demonstrated their toxicity to fish and rats. Later, in the late 1980s, workers at a DuPont chemical plant were found to have an above-average risk of leukaemia and liver cancer. Around the factory, many people became ill from polluted drinking water. This so-called ‘Parkerson scandal’ was narrated in the film Dark Waters, which exposes DuPont’s careless practices. In addition to various cancers and liver complications, PFAS have been linked to increased cholesterol and reproductive health problems.

Today, a lot of research is still being done into the effects of PFAS on our health. A recent report from the United States’ Centers for Disease Control and Prevention found that ingesting small amounts of PFAS over a longer period affects the immune system. In the Netherlands too, we appear to ingest too many trace amounts of PFAS through food and drinking water. According to research by the RIVM, most PFAS come from food (about 83 to 98 percent of the total) and 2 to 17 percent through drinking water. The RIVM advised the government to help reduce exposure to PFAS.

This advice stems from an extensive report by the European Food Safety Authority (EFSA), which in 2008 minimised the possible health problems faced by Europeans. In its September 2020 report, the EFSA changed its tone and highlighted the dangers of PFAS, with the urgent request to tighten drinking water guidelines accordingly. The EFSA has set a drinking water limit of 4.4 nanograms per litre for the four most common PFAS: perfluorooctane sulphonic acid (PFOS), perfluorooctanoic acid (PFOA), perfluorononanoic acid (PFNA) and perfluorohexane sulphonic acid (PFHxS).

The picture is still unclear, so RIVM is taking a closer look at PFAS concentrations in drinking water and the environment. The Institute writes that it cannot say for sure whether their findings are precise, which could mean that the limit value is too high. Due to the impact on our health, future research may lead to the advice to further tighten standards and legislation. Together with the Ministry of Infrastructure and Water Management, RIVM wrote to the House of Representatives in January 2021. In their letter, RIVM states that it needs at least another year to test the risks and health implications of PFAS.

In addition to ground and surface water, RIVM will further analyse food, air and soil. In 2020, RIVM had already commissioned the consultancy and engineering firm Tauw to conduct a study into 29 different PFAS values in Dutch soil. At 100 measurement locations – in urban, industrial, agricultural and nature areas – throughout the Netherlands, it mainly found two types of PFAS: PFOA and PFOS. The concentrations are particularly high in the western Netherlands, where there are many factories, for example the Chemours PFAS factory located in Dordrecht. In June 2021, RIVM advised against eating fruit and vegetables from gardens within a 1 km radius of Chemours.

For the time being, it is proving very difficult to remove PFAS from the environment. RIVM Drinking water researcher Monique van der Aa explains: “You can only remove the vast majority of PFAS from the water with membrane purification, such as reverse osmosis. But that is an expensive technique that consumes a lot of energy. Few drinking water companies therefore use membrane technology.” Waternet is starting with a measurement program and is looking at alternative techniques that remove more PFAS from the water. It currently uses activated carbon for this purpose, which, according to a study by Rijkswaterstaat, removes PFAS almost completely from polluted water under intensive use and under ideal conditions.

Both the Union of Water Boards (UvW) and the Association of Drinking Water Companies (Vewin) are concerned about the amount of PFAS in the environment and have sounded the alarm. While the UvW is in favour of a source approach, Vewin is arguing for a total ban on the production of PFAS. That call has now also penetrated Brussels. The Netherlands is working with a number of EU Member States on a European ban on PFAS. Although a ban will help prevent a new spread of the substances, the existing PFAS will remain in the environment for years to come. In the meantime, both RIVM and Waternet maintain that the drinking water is healthy.