Lead in Drinking Water: A Health Hazard Throughout History 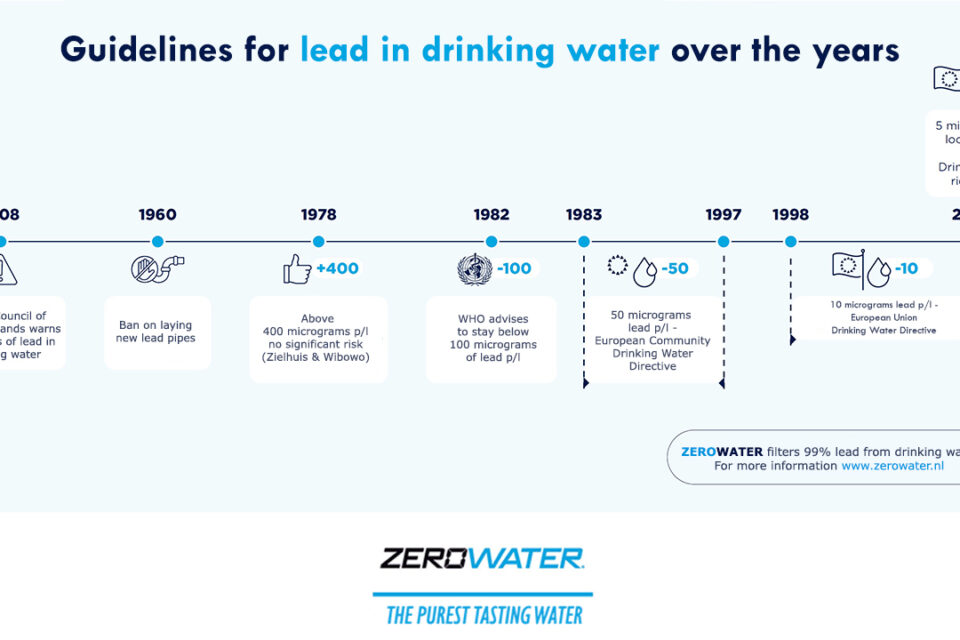 We have known lead can be dangerous to health since we started using it to transport water back in Roman times. Despite this, lead is still a problem for many households across Europe, including The Netherlands. Is there lead in your tap water? And if so, what can you do about it?

Lead is a heavy metal, present in small amounts in the earth’s crust. It is soft, malleable, and sturdy, which makes it a good material for a number of uses. And indeed, the ancient Romans used it to build their water pipes, sewage systems, and aqueducts. The words plumbing and plumber come from the roman “plumbum.”

Lead’s toxicity was known as early as the first century BC, when the architect Vitruvius was the first to recognise the adverse health effects of lead, noticing that those who worked with the material were often ill.

Regardless of the warnings, lead continued to be used for water infrastructure. In modern times, lead has been used in cosmetics, toys, paints, petrol, batteries, solder, ammunition, and plumbing materials.

How does lead end up in tap water?

Despite this, we are still exposed to lead because of human activity. Lead is released into the air from industrial sources (such as old mines) as well as aviation fuel.

But if you live in a home with lead water pipes, you may be exposed to dangerous levels of lead in your  tap water. This may be the case if your home was built before the 1960’s. What’s more, water pipes in new-build homes can also release heavy metals into the water.

What are the potential health impacts of lead?

The ancient Romans knew it, and modern science has confirmed it: lead is toxic to the body and brain.

Chronic exposure to lead can cause anemia, kidney problems, vitamin D deficiency, impaired metabolism and neurotoxicity. It has been linked to reproductive health problems such as reduced sperm quality and an increased risk of miscarriage. It is also associated with low birth weight, delayed postnatal growth, as well as behavioral problems like hyperactivity. As if that wasn’t bad enough, the International Agency for Research on Cancer (IARC) has classified lead as a “probable human carcinogen.”

Lead exposure is particularly dangerous for children. It accumulates in children’s brains, where it inhibits the creation of new connections between nerve cells. This affects the hippocampus, which plays a role in memory and learning. Children are at higher risk from lead exposure because they drink more in proportion to their body weight and their intestines absorb lead more easily.

Regulations on lead – WHO guidelines and EU Water directive

Standards around lead have changed drastically over the years.

In 1978, scientists Zielhuis and Wibowo considered 400 micrograms of lead per litre to be harmless to human health.

From 1983, the European Drinking Water Directive specified that tap water should contain no more than 50 micrograms of lead per litre.

In 1997, the World Health Organisation (WHO) recommended that this standard be significantly tightened. As a result, the current standard is 10 micrograms of lead per litre. But even this new lower limit has come under pressure.

Indeed, the latest European Directive on the quality of water destined for human consumption states that lead concentrations “should be as low as reasonably practicable.” It states that by 2036, the limit value for lead in drinking water will be set to 5 micrograms per litre.

Lead in tap water in the Netherlands

A recent report by the Netherlands’ National Institute for Public Health and the Environment (RIVM) finds that adults in the Netherlands are exposed to between 0,41-0,74 micrograms per kilogram of bodyweight per day (mg/kg/bw/day). For children under 7, the values were between 0,88-1,3 micrograms mg/kg/bw/day. These levels are lower than the tolerable daily intake (TDI) of 3,6 micrograms mg/kg/bw/day, but the EFSA says that even at these levels, adverse effects from lead, particularly in children, cannot be excluded. “Lead turns out to be more harmful than previously thought,” says Fred Woudenberg, Head of living environment at GGD Amsterdam in an interview with De Groene Amsterdammer.

According to the RIVM, lead exposure via tap water is at times too high. People living in old houses with lead water pipes, as well as newly built homes with new pipes and taps are at risk of a higher exposure to lead than is considered safe. Their study finds that 45-68% of the total daily lead exposure comes from these sources.

In 2020, NOS reported on families living in Amsterdam Noord, who have to collect water from a public tap every day, because the water flowing through their homes contains dangerous amounts of lead. An estimated 100,000 to 200,000 homes in the Netherlands still have lead water pipes.

How to remove lead from tap water

The first thing to do is identify whether your water pipes are made of lead. There are two ways you can do this:

If you find lead pipes in your home, it is important to replace them. If you are in a rental property, contact the landlord or housing association.

In the Netherlands, there have already been dozens of lawsuits between tenants and housing associations because of high lead concentrations in tap water. In almost all cases, the courts decide that the water pipes have to be replaced or that the tenants were entitled to a rent reduction. In some cases, that reduction is as high as sixty percent until the water pipes are replaced.

A new water pipe or new tap can release lead or other metals to the drinking water during the first 3 months after installation. To avoid drinking water laced with metals, follow these steps:

Do you want to ensure that there are no lead residues in your drinking water? ZeroWater removes 99 percent of lead from your tap water. In addition to lead, our filter also removes limescale, glyphosate, chlorine, PFAS (PFOS/PFOA) and micro-plastics. For more information, see https://www.zerowater.eu.