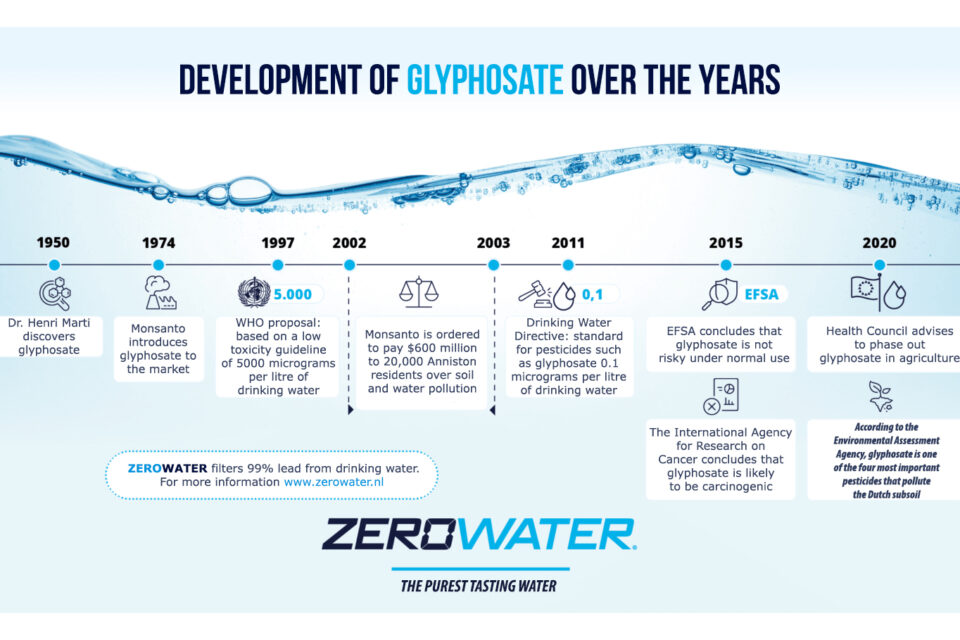 Glyphosate has been a topic of heated discussion for years. Some say it causes environmental damage and adverse health effects. Others say it doesn’t. Extensively used in agriculture, glyphosate is now found in ground and surface waters throughout Europe. Is there glyphosate in your tap water? According to the Dutch Association of Drinking Water Companies (Vewin): “Glyphosate threatens our drinking water.”

Glyphosate is one of the best-known herbicides in the world (you may know it by the name of Round-up). Farmers use it to control weeds. Municipalities also use it in public spaces to get rid of unwanted plants. It works by preventing certain weeds from making the proteins and enzymes they need to grow. As a result, the weeds die.

American company Monsanto (now acquired by the German chemical company Bayer) put glyphosate on the market in 1974. Since then, it has become one of the most widely used herbicides in the world, with over 8 billion kilograms being sprayed worldwide.

How does glyphosate end up in tap water?

When glyphosate is spread onto crops or sprayed on weeds, it seeps into the soil. When it rains, the water carries the soil and the glyphosate it contains into rivers and streams. It can also seep deeper, into groundwater sources. Drinking water is extracted from surface water (rivers, streams, lakes) and underground water sources, then carried through the public water network to our taps. While water goes through several treatment processes before reaching our homes, these methods do not remove glyphosate completely.

What are the potential health impacts of glyphosate?

Glyphosate’s potential toxic impact on human health and the environment has been studied and debated for years. But official bodies have come to different conclusions about its health risks.

The justice system in the US seems to lean towards the IARC’s findings. Bayer regularly loses lawsuits and pays staggering amounts to victims. It has recently agreed to pay over $10 billion to settle cancer suits.

In 2017, the European Chemicals Agency (ECHA) ruled that glyphosate is not carcinogenic. These wildly different conclusions have triggered a scientific debate about how research should be carried out, which studies can be included and how to assess the data.

In March 2021, a new study showed that the EU’s assessment of glyphosate’s safety was based on flawed science. Out of 53 industry studies the glyphosate manufacturers had submitted in the previous glyphosate approval process, only two could be assessed as scientifically ‘reliable’, when using the applicable OECD Guidelines. Thirty four of the studies were ‘not reliable’ and 17 only ‘partly reliable’.

Putting to one side these conflicting findings, one thing is certain: we ingest glyphosate. This happens partly through food (chemical residues and soil on agricultural crops), inhalation (when glyphosate is sprayed in gardens, public spaces, or in residential areas near agricultural zones), through contact with the skin during use, or via drinking water. Despite the fact that drinking water companies go to great lengths to purify drinking water, glyphosate is sometimes present in low concentrations.

So what are the regulations controlling this substance?

Regulations on glyphosate – WHO guidelines and EU Drinking Water Directive

According to the World Health Organisation (WHO), glyphosate and its byproduct A-Amino-3-Hydroxy-5-Methyl-4-Isoxazolepropionic Acid (AMPA) are low-toxicity. For this reason, the WHO has not established a formal guideline value for glyphosate in water. They base this on a NOAEL (No-observed-adverse-effect-level) of 32 milligrams per kilogram of body weight per day. For an average adult weighing 70kg, this equates to 2,240 milligrams per day. While it doesn’t propose limits of glyphosate, it does suggest a limit of 0,5 microgram per litre for combined pesticides.

The European Drinking Water Directive places limits on the amount of glyphosate that can be present in drinking water. For individual pesticides and herbicides such as glyphosate, the limit is 0,1 microgram per litre of water. The total amount of pesticides in water should not be above 0,5 micrograms per litre.

Glyphosate in tap water in the EU

Data from Wageningen University shows that 45 percent of the 300 soil samples from various European agricultural lands contain glyphosate and AMPA.

A report by European water surveillance stations indicate that 5-15% of surface water sources and 7% of groundwater sources exceed the environmental quality standards for herbicides. This is a problem for aquatic life, and has a domino effect on wildlife in general. The progressive decline in the number of honeybees other insects, which contributes to the near extinction of several species of birds is in part due to the pesticides and insecticides we use in such large quantities.

And glyphosate has also been found in our bodies. A study published in January 2022 found glyphosate residues in 99% of the French population.

Glyphosate is approved for use in the EU until the 22nd December 2022. But we can’t count on a ban. The European Commission’s Assessment Group on Glyphosate (AGG), set up to examine the license renewal for glyphosate in Europe, concluded that glyphosate meets the approval criteria and is not dangerous for human health.

Glyphosate in tap water in the Netherlands

In the Netherlands, research by the RIVM shows that over half of Dutch drinking water sources (135 out of 216) are polluted with man-made substances. According to calculations by the Netherlands Environmental Assessment Agency (PBL), chlorpropham, terbuthylazine, bentazone and glyphosate are the pesticides that pollute the groundwater the most. “Measurements show that glyphosate is still the biggest problem substance in drinking water extraction,” says PBL researcher Aaldrik Tiktak. According to a report by the Netherlands Waterworks Association VEWIN, “Glyphosate exceeds levels of 0,1 micrograms per litre every now and then, and its metabolite AMPA is almost continuously present in levels well above the drinking water standard.”

The Dutch Health Council agreed. In 2020, they published a report recommending that pesticides be phased out of agriculture and horticulture. Unfortunately, a ban on the professional use of pesticides, including glyphosate, was reversed by the courts in the Netherlands. A new ban should be initiated by the CTGB (Board for the Authorisation of Plant Protection Products and Biocides). But because the CTGB follows the EFSA’s advice, this is “not the case for the time being”, according to the Minister of Agriculture, Nature and Food Quality Carola Schouten.

In Germany, where a scandal recently came to light around manipulated studies about the toxicity of glyphosate, the government is working on a national ban.

How to remove glyphosate from tap water

Water companies are finding it increasingly difficult to filter pesticides and herbicides. In an interview with EenVandaag, the director of the Union of Water Boards in the Netherlands, Sander Mager says “We see more and more substances entering the water, and also many substances that we still know very little about – substances that we may not even be able to detect properly. Let alone eliminate properly.”

Another problem is that together, different chemical residues can end up having a stronger toxic impact. Mager hopes for a root-cause approach; adapting regulations to prevent substances from being released into the environment. “That also means that a real change must be made in the admission policy. Under the guise of: what does not come in, does not need to be removed. We think it is very important to tackle that quickly now.”

Given the complexity of pesticide regulations and conflicting research, the question is how to protect our drinking water from contaminants in the short term.

Do you want to ensure that there is no glyphosate in your drinking water? ZeroWater is the only filter that removes 100% of glyphosate. Our filter also removes limescale, lead, chlorine, PFAS (PFOS/PFOA), microplastics, and more. Interested? Take a look at our webshop.

In the video below, researchers test different filters and study how well they filter glyphosate from the water. Check it out here: