Chromium-6: A Hidden Danger in our Drinking Water 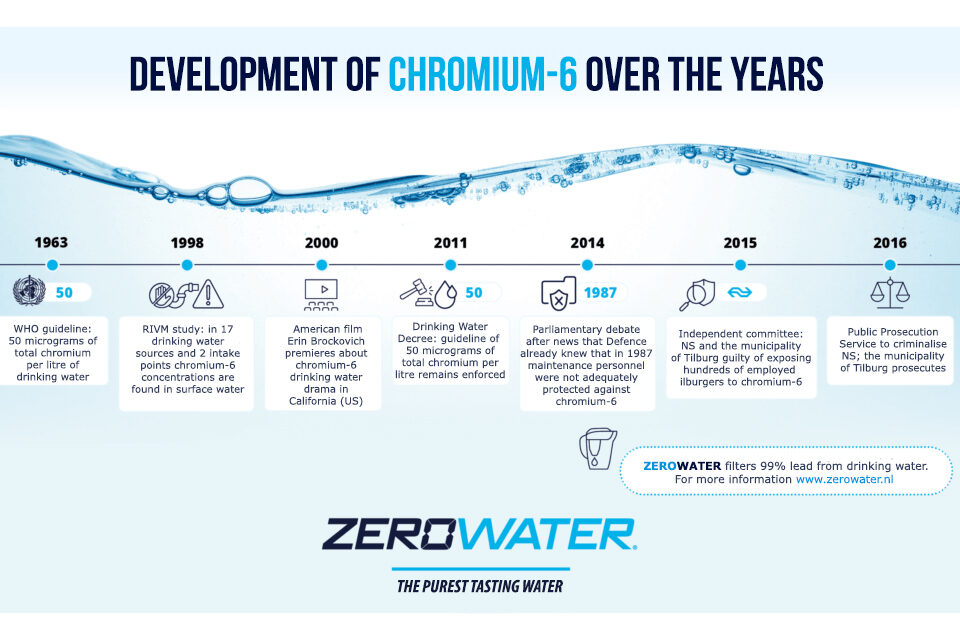 It is known as the ‘new asbestos’ and is increasingly in the news: chromium-6, a toxic metal that is dangerous to health, is present in our drinking water. “We have piping and chromium-6 may be present there,” says René Nuij, operational safety expert at Waternet.

The fact that chromium-6 is harmful to health first became apparent in Brabant – The Netherlands. Between 2004 and 2011, participants of a reintegration project in Tilburg carried out maintenance work for the Dutch Railways (NedTrain). During the sanding work, chromium-6 was released. As a result, some of the 33 participants suffered demonstrable health damage. The case went to court, and NedTrain was found liable for the damage suffered by the victims. According to the court, NedTrain should have known that the participants would be exposed to very dangerous substances.

Chromium is a metal that is found in the air and in the soil. The most common forms of chromium are chromium-0, chromium-3 and chromium-6. Not every form of chromium is harmful. Chromium-3 is a mineral that occurs naturally on earth and is present in certain foods. Chromium-3 does not harm health. In fact, not getting enough chromium-3 can even increase the risk of diabetes. Only if you are allergic can it lead to allergic reactions. Chrome-0 is understood not to be harmful in its original form, and is used in chrome plating (of faucets, for example).

Chromium-6 is formed and released when materials containing chromium-0 or chromium-3 are processed with heat, for example during the sanding work in Tilburg, or during grinding, welding or combustion work. Inhaling chromium-6 can cause nasal irritation and nose bleeds. It can also cause long-term health problems, such as gene mutation, stomach problems, respiratory issues, kidney and liver damage, weakened immunity, and cancer.

The chrome-containing paint used on the trains in Tilburg has now been banned. Nevertheless, the metal is still regularly released into the environment because this type of paint is still present on many old buildings. During renovation or maintenance works, chromium-6 can end up in the air, soil and possibly in our surface water: our drinking water source. The water solubility of each chromium-6 compound differs, up to 1667 grams per litre. And that is important, because the extent to which chromium-6 dissolves in our surface water affects drinking water.

Drinking water companies must also sample and test chromium at the tap via a so-called Random Daytime (RDT) test. This sample is representative of the amount of metal that a consumer ingests weekly from drinking water. Measurements taken between 2004 and 2006 showed that chromium-content sporadically exceeded the standard. In 2019, the National Institute for Public Health and the Environment (RIVM) issued a reassuring statement: “There is no health concern due to exposure to chromium-6 through food or drinking water.” According to the RIVM’s report, concentrations of chromium-6 in drinking water in the Netherlands are “very low”, but in urban areas the concentration in the air are higher.

In areas such as in IJmuiden, the smoke plumes from steel giant Tata Steel contain chromium-6. The company produces questionable amounts every year. “According to the 2016 annual report, the emissions amounted to 7.79929052 kilograms per year. 2017 annual report: exactly the same number. 2018 and 2019: ditto. How credible is that?” says Jacob de Boer, professor of environmental chemistry and toxicology at VU University Amsterdam. Despite a ban on chromium-6, the metal has not completely disappeared from our society. In fact, you can find it in all kinds of products, such as cosmetics, preserved wood, cement, leather and tattoo ink.

Partly for this reason, the Belgian newspaper De Morgen has placed chromium-6 in the top 10 substances that threaten our soil and waterways – the sources for our drinking water. “We had known for some time that chromium-6 was present in the soil, but recently we also learned that buildings and waterways are contaminated with it,” says Jan De Vos, environmental engineer and soil expert. “We were already aware of the dangers of lead paint and asbestos, but chromium-6 also appears to be a serious problem that must be taken into account during demolition work. The EU has already drastically curtailed their use, but historical pollution also needs to be addressed.”

In the United States, the problem became known to the general public thanks to the film Erin Brockovich, which is based on a true story. Lead actress Julia Roberts plays a lawyer who helps the victims of contaminated groundwater. It remains to be seen whether such a disaster can also be expected in the Netherlands. Nevertheless, the attention is growing. René Nuij of Waternet issues a warning in his ‘Security Heroes’ campaign of the Ministry of Social Affairs and Employment. “We have recently also been dealing with chromium-6. We have piping, and chromium-6 may be present there. I think it’s my role to warn.”

Although government institutions state that chromium-6 is not a problem in our drinking water, you can remove all doubts with the ZeroWater water filter. ZeroWater removes 100 percent chromium-6 from tap water. Our filter also removes lime, glyphosate, chlorine, PFAS (PFOS/PFOA) and microplastics.